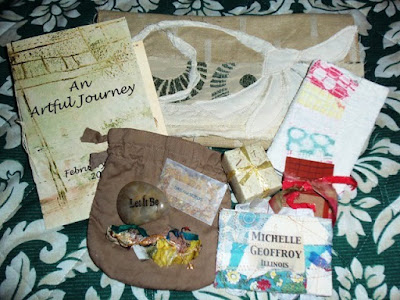 What a wonderful time I had in California at the Artful Journey Retreat. Cindy is a really great woman who planned a terrific event. Look at the welcome gift I received. It was beautiful! She was my angel on the last day when I lost the keys to my rental car! She went above and beyond to help me out and I am forever grateful. 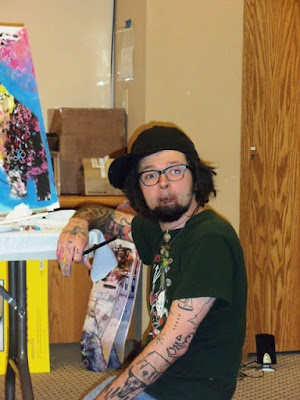 I signed up to take Jesse Reno's class. I told you a little about him the day I left. I wasn't sure what to expect. I thought he might be a little rough around the edges. Let me tell you, he was great. He was really funny too. He told so many great stories and he genuinely wanted to teach us all he could. I even appreciated his grumpiness in the mornings. It reminded me of my 17 year old. :o) 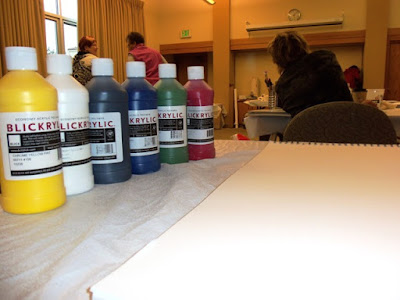 His supply list was basic. Inexpensive paints, inexpensive paper and some brushes. That's it. Look how neat and clean everything looked when I first got there. 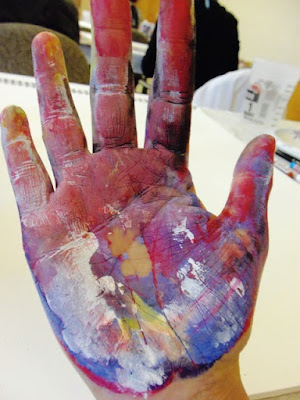 Nothing stayed neat for long. The first thing we did was apply the paint with our hands. It was fun. The idea is that you create this interesting "ground" with texture and color. This is done exclusively with your hands. We weren't allowed any brushes until day two. Can you imagine? 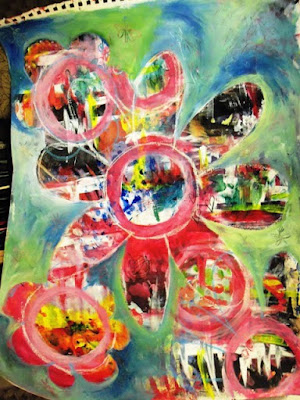 Once you have your ground down you begin to block out shapes and forms. I had THE HARDEST time with this part. I am telling you that I was so angry with myself. This flower was my first attempt and he brought it up the front of the room to show everyone what NOT to do. Hee hee.

The idea is that you are supposed to let things emerge slowly instead of making a hard shape. Now it was going to be a lot harder for this painting to be anything other than a flower.

We worked on 2-3 paintings at a time. He works on 10-15 in his studio. I had my grounds down on 3 of them and a flower on one and I was STUCK. He told me what to do to help me and I got back to my seat and forgot everything he said. I left for lunch so pissed off. I really could have punched someone. He kept looking over at me and he knew I was all kinds of messed up. 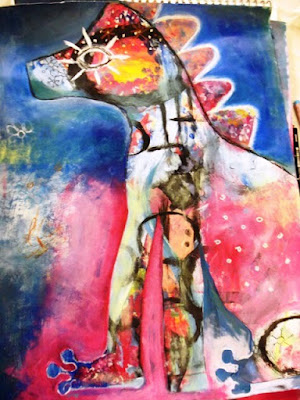 When we got back from lunch he sussed out the energy in the room. I don't think I was the only one struggling but I was definitely the most vocal about it :o) He told us that sometimes you just needed to get something blocked out so he was giving us 5 minutes to do it. What?! I about died.

I was frozen and he walked by and said, "You now have 4 minutes, now 3." Ugh! I finally just jumped in and created some weird animal like thing. Some people thought it was a dog. Others, a horse and still others thought a sea horse. I didn't know what the hell it was and I didn't like the looks of it but I felt so much better. My energy shifted immensely and I thanked him for pushing. 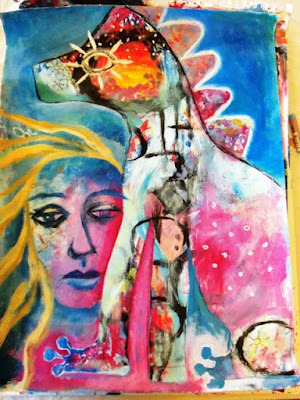 The painting continued to morph. I added a woman. 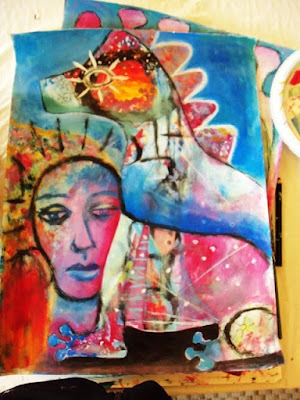 And then I stole the bottom of my creature and gave it to the woman. Now I had some funky animal woman. I have no idea. 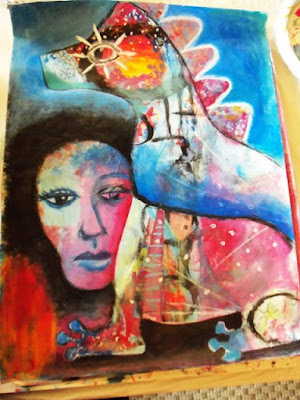 I kept playing with it...blocking out the eye and repainting it (about 10 times), playing with the colors. Jesse called me his "every five minute girl" because I kept going up there to pick his brain. I figured I was there to learn his techniques and the best way to do that was to ask questions. He helped me so much. 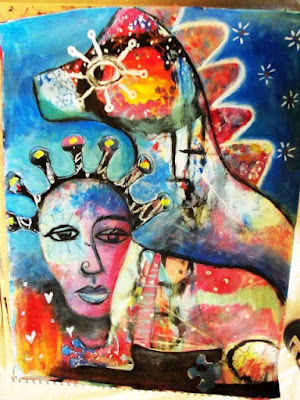 This is pretty close to the final product. Like I said, who knows what or why. :o) 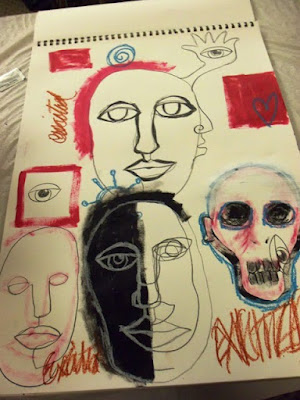 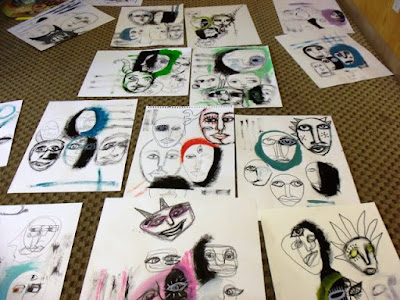 One of my favorite exercises was when he had us draw random things. He would say, "Draw a face. Now put a face coming out of the side. Now have an appendage coming out of the head." We just followed along. I have to say we were a bit taken back when he told us to paint a skull. What? We were a bunch of girls. We didn't want to paint a skull. He said he was going to be the only guy in a room of girls all weekend and since he knew about accessories we could paint a skull. We all laughed and painted our skulls. 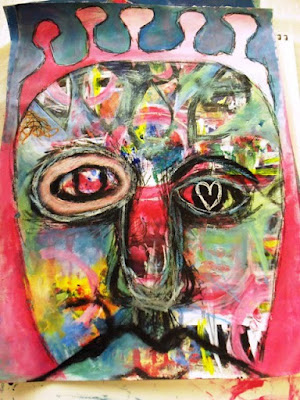 My flower managed to transform itself into a face. A wacky face for sure. I worked on it for quite a while to get it to this stage. When I brought it up to him he asked me if I liked it and I said no, not really. So he told me to change the shape of it. To wreck it. In fact, he said that if we didn't wreck our painting at least twice it wasn't done. 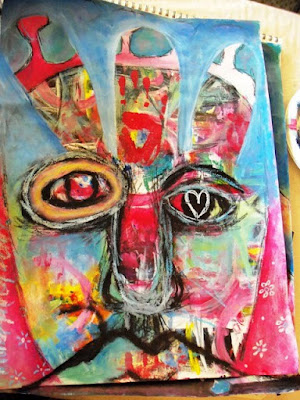 I was a bit timid to wreck it I guess but I did change the shape and I hated it even more. So, change it again. 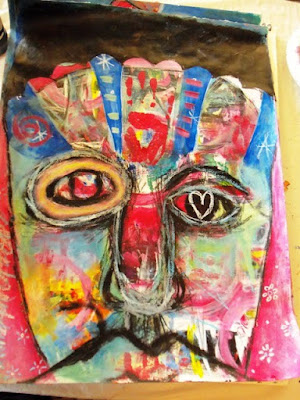 When I created this shape in the head it began to like a mask to me. You can see how the layering can really change things up. Suddenly my blue background made stripes so I put some lines and shapes on top to integrate it so it looked like one piece. 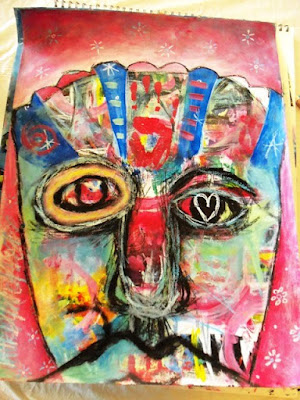 I tweaked the background a bit and we were out of time. This was my finished painting.

I really enjoyed learning this type of painting. He makes it look so easy but it is REALLY HARD! It is sort of the opposite of what you would normally do. Instead of building up shapes you are blocking shapes out of the background and then layering and blocking some more and on and on.

I have to tell you that I loved Jesse's take on life. I wrote down a bunch of things he said and I will share them with you in my next post.
Posted by Michelle at 6:00 AM 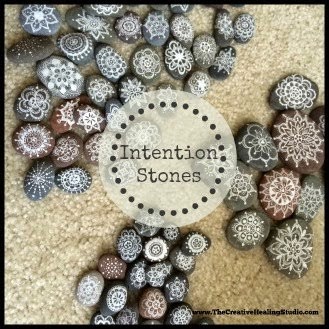 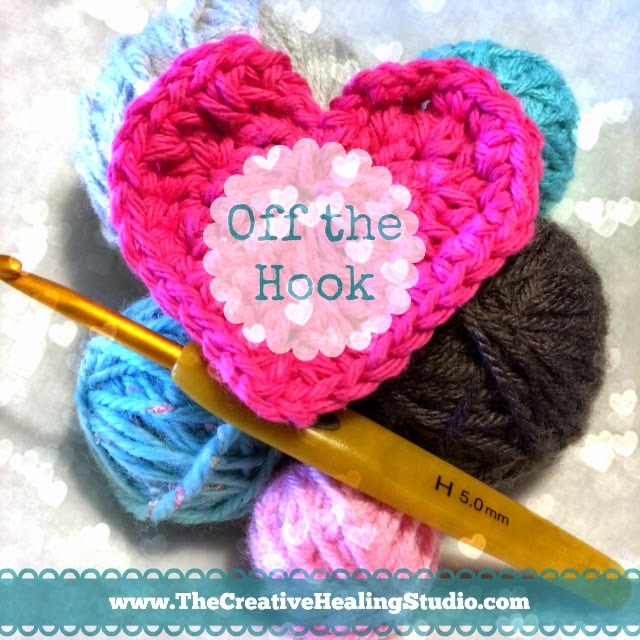